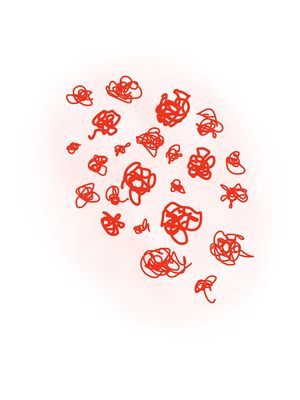 Differential diagnosisis the identification of the nature and cause of a certain phenomenon. Diagnosis is used in many different disciplines with variations in the use of logic, analytics, and experience to determine "cause and effect". In systems engineering and computer science, it is typically used to determine the causes of symptoms, mitigations, and solutions

Most commonly, glomerular vessels are associated with SCCs, in which the glomerular vessels are principally distributed focally in clusters and at the periphery of the lesion together with hyperkeratosis (i.e., scaly surface). In a study of Bowenalso known as squamous cell carcinoma in situ[1] is a neoplastic skin disease. It can be considered as an early stage or intraepidermal form of squamous cell carcinoma. It was named after John T. Bowen’s diseaseThis glossary term has not yet been described. (BD), 80% of pigmented BD and 100% of nonpigmented BD displayed glomerular vessels [4]. In another study, glomerular vessels were seen in 81.2% of BD cases with a PPV of 61.9%. In contrast, glomerular vessels were seen in only 1.3% of melanomas, 12.2% of SKs, and 7.1% of invasive SCCs [2]. Glomerular vessels can also be seen in clear cell acanthoma(also known as "Acanthome cellules claires of Degos and Civatte," "Degos acanthoma," and "Pale cell acanthoma") is a benign clinical and histological lesion initially described as neoplastic, which some authors now regard as a reactive dermatosis. It usually presents as a moist solitary firm, brown-red, well-circumscribed, 5 mm to 2 cm nodule or plaque on the lower extremities of middle-aged to elderly individuals The lesion has a crusted, scaly peripheral collarette and vascular puncta on the surface. It is characterized by slow growth, and may persist for years. The clinical differential diagnosis includes: dermatofibroma, inflamed seborrheic keratosis, pyogenic granuloma, basal cell carcinoma, squamous cell carcinoma, verruca vulgaris, psoriatic plaque, and melanoma. where the vessels will be arranged in a string of pearlsCoiled or dotted vessels arranged in lines clear cell acanthoma distribution, in psoriasisThis glossary term has not yet been described. where the vessels are distributed throughout the lesion in an organized pattern, and in stasis dermatitisalso known as eczema is a group of diseases that results in inflammation of the skin. where these vessels will be visible in normal appearing skinThis glossary term has not yet been described.. Lastly, glomerular vessels can also be seen in melanomaThis glossary term has not yet been described., especially within metastatic foci. 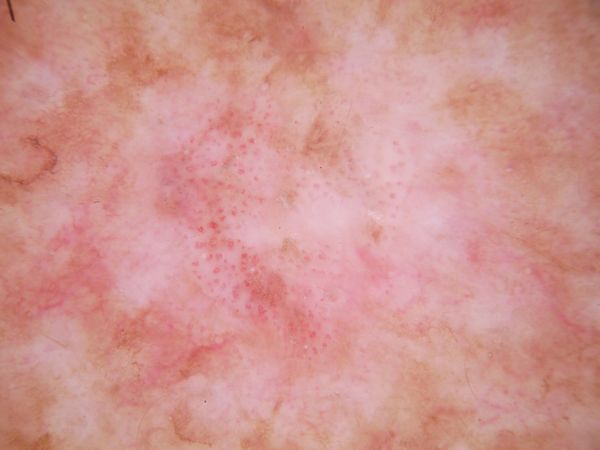 Glomerular vessels appearing on a squamous cell carcinomaThis glossary term has not yet been described.


ReferencesThis is material contained in a footnote or bibliography holding further information.: