Glomus-cell tumors are rare benign harmatomas of the glomus body, a specialized arteriovenous anastomosis located in the stratum reticularis of the dermis that is involved in thermoregulation[1]. They represent 1-5% of soft tissue tumors of the hand [2] and are mostly located in subungual locations even if they can also rarely appear in extra-digital areas.

Clinically they appear in young adults (20-40 years) as small painful reddish subungual tumefactions. Pain is increased by pressure and by exposure to cold temperatures.

Nail plate dermoscopy can reveal the presence a structureless purple or blue spot through the nail plate or may find numerous ramifying vesselsThis glossary term has not yet been described. within a homogeneous red-blue tumor[3],[4]. 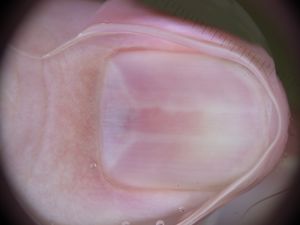 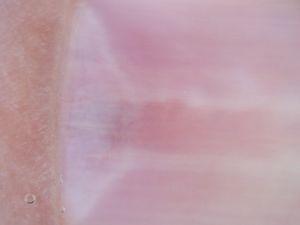 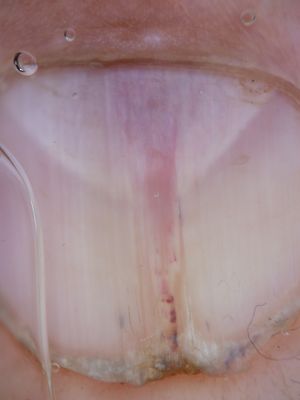 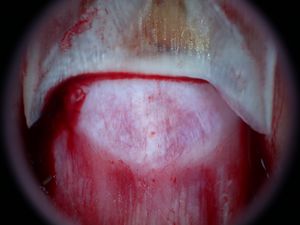 Imaging by MRI can helpRefers to giving assistance or support to others for mutual benefit to precise the localization of the tumor and facilitate the pre-surgical evaluation of their size.

The treatment of glomus-cell tumors consists of a complete surgical removal of the lesion with histological examination. Intra-operative dermoscopy can help delimitate the tumor for an optimal resection, after anesthetic block, the use of a tourniquet (to avoid excessive bleeding) and careful avulsion of the nail plate.

ReferencesThis is material contained in a footnote or bibliography holding further information.
Retrieved from "https://dermoscopedia.org/w/index.php?title=Glomus-cell_tumors&oldid=13988"
Category: