Level 3: Intradermal neviThis glossary term has not yet been described. 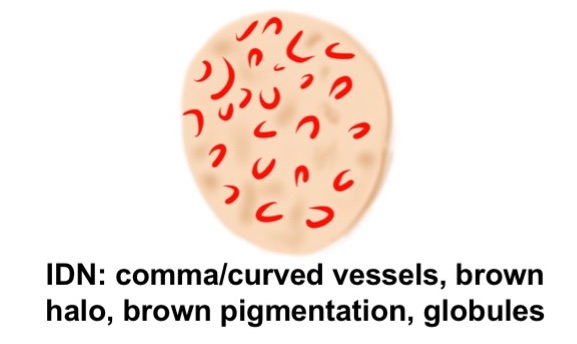 Intradermal nevi (IDNIntradermal nevus) are first and foremost defined by their clinical morphologyThis glossary term has not yet been described. as either raised dome shaped lesions or as sessile mamillated lesions. IDN with this clinical morphology will usually reveal one or more of the following features: comma vesselslinear curved short vessels dermal nevi, brown halo, globulesThis glossary term has not yet been described., small foci of tan structureless pigmentation, hypopigmented areas. They can also reveal arborizing vesselsanalytic term is branched vessels; Bright red sharply in focus large or thick diameter vessels dividing into smaller vessels; BCC making it difficultneeding much effort or skill to accomplish to differentiate them from BCCAbbreviation for Basal Cell Carcinoma. The cluesEvidence, in an investigation to the diagnosisis the identification of the nature and cause of a certain phenomenon. Diagnosis is used in many different disciplines with variations in the use of logic, analytics, and experience to determine "cause and effect". In systems engineering and computer science, it is typically used to determine the causes of symptoms, mitigations, and solutions of IDN include the presence of the aforementioned features and lack of other BCC-specific features. In addition, the arborizing vessels in IDN are often a tad out of focus and have a bluish hue. In contrast, in BCC the arborizing vessels are usually sharply in focus and bright red in colorColor (American English) or colour (Commonwealth English) is the characteristic of human visual perception described through color categories, with names such as red, yellow, purple, or blue..