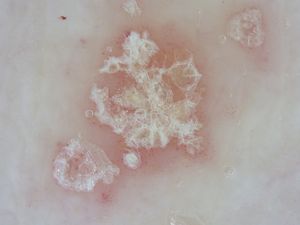 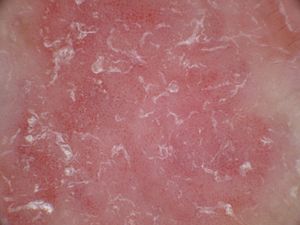 Important for differential diagnosis, the uniform distribution of the red dots within the lesion represents the dermoscopic hallmark of psoriasis. Dotted vessels may be detected in several inflammatory dermatoses, but no other diseaseThis glossary term has not yet been described. exhibits the symmetrical and homogenous arrangementThis glossary term has not yet been described. of vessels all over the lesion that characterizes psoriatic plaques, unless thick superficialThis glossary term has not yet been described. scales cover them.[1] Scales removal will bring to light the characteristic vascular pattern of psoriasis, possibly together with tiny red blood drops, which can be characterized as the dermoscopic “Auspitz sign”. A specific feature for the diagnosis of psoriasis is the sign of red globular rings, described by Vazquez-Lopez et al. If present, the red globules are arranged in irregular circles or rings. But even if highly specific, this sign is only seen in a minority of psoriatic lesions. Other types of vessels distribution are extremely rare in psoriasis.[1][4] In addition, light red background color and white superficial scales are two common dermoscopic criteriameasure of how well one variable or set of variables predicts an outcome of plaque psoriasis. In differential diagnosis of erythematosquamous dermatoses, scale color is of particular value: Yellow scales are a negative predictor of plaque psoriasis, therefore argueing for the presence of dermatitisalso known as eczema is a group of diseases that results in inflammation of the skin.. [1] Dermoscopic findings of psoriasis may vary dependent of the body sitedescribes the area of the body and the various amounts of scaling. In psoriatic balanitis and inverse psoriasis lesions that lack scaling, the regularly distributed red dots are prominent. Contrariwise, in scalpThis glossary term has not yet been described. or palmoplantar psoriasis, thick hyperkeratotic plaques hide the typical vascular structures, which may be recognized after removal of the scales.[5]

Regular dermoscopic examination is of avail in patients under treatment with topical steroids or systemic biological agents, because additional morphologic information might be helpful for early detection of a relapse. Additionally, steroid-induced skin atrophy is earlier detected by dermoscopy (by revealing characteristic linear vesselsLinear mildly curved vessels considered irregular when different sizes shapes and curves with a haphazard or random distribution are presented and considered regular when short and fine (thin) linear vessels prevail various diagnoses) than in the clinical setting.[6]

ReferencesThis is material contained in a footnote or bibliography holding further information.
Retrieved from "https://dermoscopedia.org/w/index.php?title=Psoriasis&oldid=16776"
Category: