Bowenalso known as squamous cell carcinoma in situ[1] is a neoplastic skin disease. It can be considered as an early stage or intraepidermal form of squamous cell carcinoma. It was named after John T. Bowen diseaseThis glossary term has not yet been described., also known as in situnot seen to be spreading from a localized position squamous cell carcinomaThis glossary term has not yet been described.[1], can affect the nail and the periungual skin or both, and in rare cases it is polydactylic. Nail involvement can reveal a white-to-yellow longitudinal discoloration of the nail plate but pigmented cases are not uncommon. In the latter case, pigmentation is often grayish rather than brown or black. 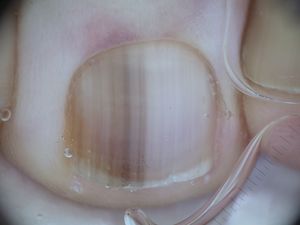 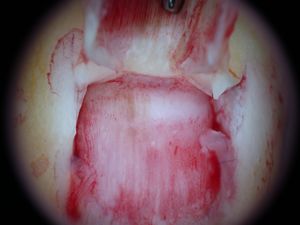 Other features of epithelial tumors of the matrix may be observed and include band-disposed splinter hemorrhages, polychromia and subungual localized hyperkeratosis. 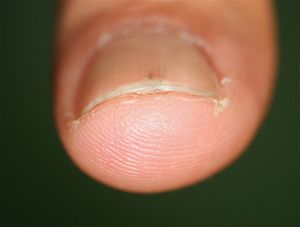 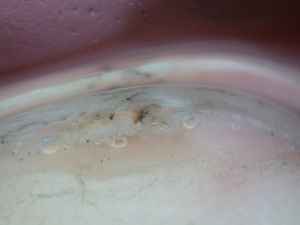 Periungual involvement reproduces the dermoscopic features observed in cutaneous Bowen disease: the presence of irregular desquamation, glomerular (round-shaped at classic × 10 or × 20 dermoscopic magnification but exhibiting a tridimensional pattern resembling the glomerulus apparatus of the kidney at higher magnification) vesselsThis glossary term has not yet been described. grouped in bunches and dust-like gray pigmentation[2].

Invasive squamous cell carcinoma exhibits quite similar but more prominent features[3] with more common bleeding, thicker localized subungual hyperkeratosis and polychromia. In some cases, the lesion is painful and the pain can be triggered by the pressure induced by the dermoscope. 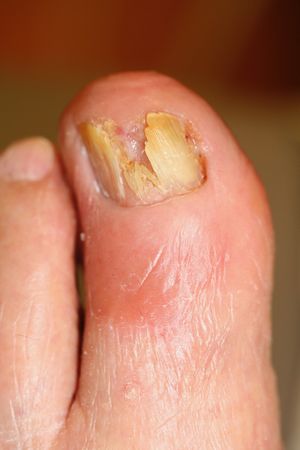 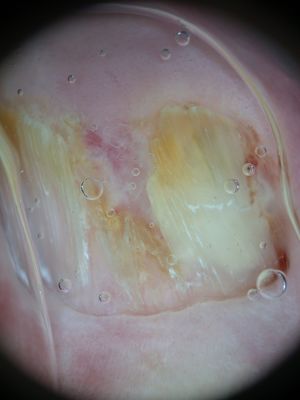 ReferencesThis is material contained in a footnote or bibliography holding further information.
Retrieved from "https://dermoscopedia.org/w/index.php?title=SCC&oldid=13642"
Category: