The typical network is regularly meshed and composed of lines that are relatively uniform in width and homogenous in color; the lines often become gradually thinner and fainter in pigmentation at the lesion’s periphery: 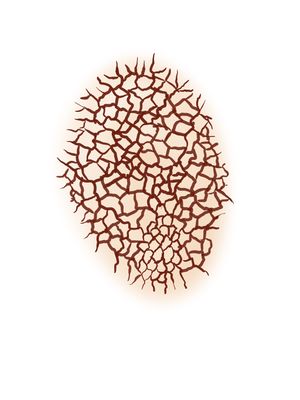 An example of a typical pigment network clinically and dermoscopically: 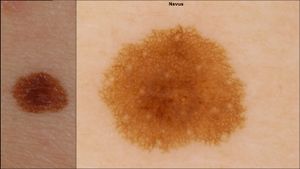 On histopathology, the lines of the typical network correspond to pigment in the rete ridges, that are relatively uniform in width and equidistant from each other. 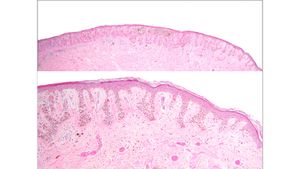 The typical network usually corresponds to the junctional component of a nevus. However, reticulation can also be seen in darkly pigmented normal skin and in heavily pigmented rete ridges as encountered in dermatofibromas, ink spot lentigo or accessory nipples [1].

Network with minimal variability in the color thickness and spacing of the lines; symmetrically distributed

Color (American English) or colour (Commonwealth English) is the characteristic of human visual perception described through color categories, with names such as red, yellow, purple, or blue.

Epidermal extensions that project into the underlying dermis

This is material contained in a footnote or bibliography holding further information.

The examination of [skin lesions] with a 'dermatoscope'. This traditionally consists of a magnifier (typically x10), a non-polarised light source, a transparent plate and a liquid medium between the instrument and the skin, and allows inspection of skin lesions unobstructed by skin surface reflections. Modern dermatoscopes dispense with the use of liquid medium and instead use polarised light to cancel out skin surface reflections.

In mathematics and computer science, an algorithm (Listeni/ˈælɡərɪðəm/ AL-gə-ri-dhəm) is a self-contained sequence of actions to be performed. Algorithms can perform calculation, data processing and automated reasoning tasks.