User=
Androgenetic alopeciaThis glossary term has not yet been described. is characterized by predominance of trichoscopic abnormalities in the frontal area compared to the occipital area [1]. The progressive miniaturization of hair follicles is observed in trichoscopyThis glossary term has not yet been described. as hair shaftThis glossary term has not yet been described. thickness heterogenity (more than 20% of observed hair shafts are thinner that terminal hair shafts [3] and increased proportion of thin and vellus hairs (higher than 10%). Moreover, there is a tendency to observe follicular units with one or two hairs instead of predominance of follicular units with three or more hairs. [1] Other trichoscopic features are: presence of variable number of yellow dots and perifollicular discoloration (hyperpigmentation, peripilar sign) [1] 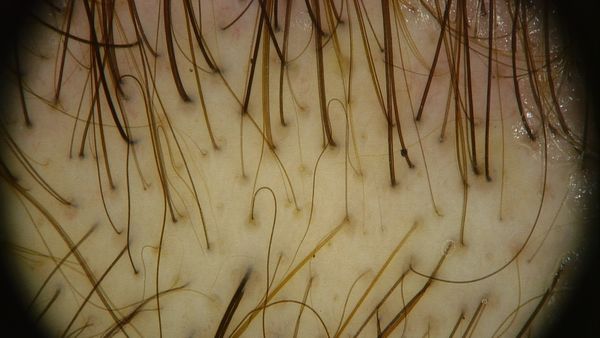 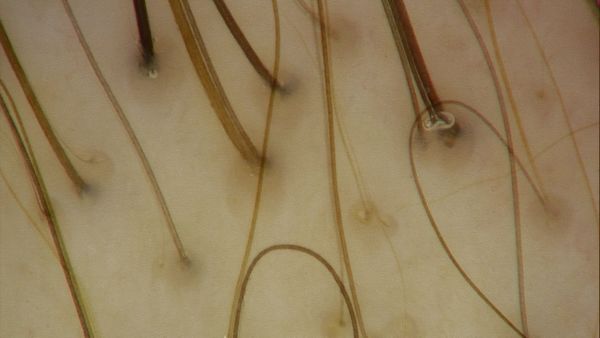 Diagnostic trichoscopic criteriameasure of how well one variable or set of variables predicts an outcome for female androgenetic alopecia [1]:


More than four yellow dots in four imagesA representation of a person, animal or thing, photographed, painted or otherwise made visible. at a 70-fold magnification in the frontal area
Lower average hair thickness in the frontal area in comparison with the occiput (calculated from not less than 50 hairs from each area)

Ratio of number of vellus hairs, frontal area to occiput >1.5:1

Fulfillment of two major criteria or one major and two minor criteria is required to diagnose female androgenetic alopecia.