User=
Angulated lines are geometrical lines in a zig-zag patternlines angulated or polygonal (non-facial skin), which may coalesce forming polygonslines angulated or polygonal (non-facial skin). These structuresThis glossary term has not yet been described. are called rhomboidsGray-brown angulated lines forming a polygonal shape around adnexal ostial openings. or zig-zag pattern (Kittler et al., 2016a) when observed in the faceis a central body region of sense and is also very central in the expression of emotion among humans and among numerous other species. or neck and are associated with lentigo maligna (LMLentigo Maligna) (Schiffner et al., 2000; Slutsky and Marghoob, 2010). In other locations, the angulated lines appear to be larger than the rhomboids seen in LM and are highly suspicious of lentiginous melanomas from chronically sun-exposed skin (Jaimes et al., 2015). Histologically, the polygonal nature of these lines is still unknown. However, angulated lines seem to correspond to a flattened dermoepidermal junction (DEJ) with fewer and more blunted rete pegs due to a proliferation of atypical melanocytes at the DEJ together with a focal accumulation of melanophages in the superficialThis glossary term has not yet been described. dermis. (Vanden Daelen et al., 2016). [1] 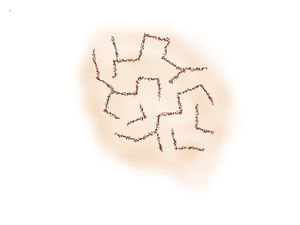 ReferencesThis is material contained in a footnote or bibliography holding further information.
Retrieved from "https://dermoscopedia.org/w/index.php?title=Angulated_lines&oldid=15769"
Category: