Blue nevusis a type of melanocytic nevus that clinically and dermoscopically will appear blue also known as "blue neuronevus", "dermal melanocytoma", and "nevus bleu" is a type of melanocyticThis glossary term has not yet been described. nevusThis glossary term has not yet been described.. The blue colour is caused by the melanin pigment being deeper in the skin than in ordinary nevi. Blue nevus commonly arise in adulthood but in some cases they are present at birth or during the first year of life. Diffuse melanocytosis are clinical variants of blue nevi characterized by the development of blue diffuse pigmentation, many years after birth, on the faceis a central body region of sense and is also very central in the expression of emotion among humans and among numerous other species. (Ota nevus), on the trunk or arms (Ito nevus), on the sacrum area (Mongolian spot). 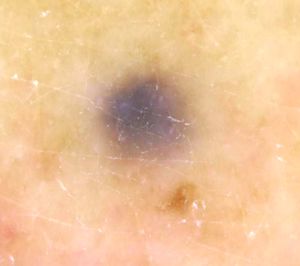 BN are benign dermal melanocytic proliferation arising from neural-crest melanocytes that likely became arrested in migration during embryogenesis. Their prevalence ranges between 1-2% in Caucasians and 3-5% in Asians. Typically they first appear in adolescence and young adulthood, even though BN can also arise in older individuals (Cabral et al. 2014). Somatic acquired mutations in GNAQ and GNA11 have been identified in BN (Van Raamsdonk et al. 2010). Clinically, common BN present as a solitary small, well-defined, round to oval shaped, flat to slightly-elevated papule with a predominant steel blue color (spectrum gray-blue-black). They are most often located on the distal extensor aspects of limbs, followed by the face and scalpThis glossary term has not yet been described., and the sacral region. Other less common locations include genitalia, oral cavity, and lymph nodes (Zembowicz 2017). The histopathologic features seen in common BN are highly pigmented bipolar spindle cells parallel to the epidermis intermingled with bundles of collagen in the mid to deep dermis, sometimes even extending to the hypodermis. Typically, there is a grenz zone at the dermoepidermal junction, which remains unaffected. When faced with blue lesions, clinical history remains of great importanceThis glossary term has not yet been described.. Blue nevi lesions arising in childhood and with no history of change are highly suggestive of common BN. In contrast, a new onset and fast-growing lesion in a middle-aged adult, or in the contextThis glossary term has not yet been described. of a previous melanomaThis glossary term has not yet been described., should raise concern for the possibility of melanoma. 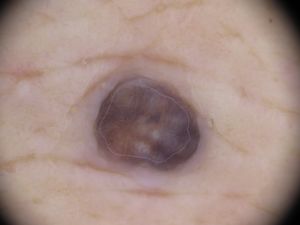 A combined nevusBenign nevus with 2 different cell population in the same lesion. Most frequently this refers to a junctional nevua in associatoin with a blue nevus with a blue nevusis a type of melanocytic nevus that clinically and dermoscopically will appear blue component and a dermal nevus component shows a characteristic image with brown homogeneous pigmentation associated with blue homogeneous pigmentation in the same lesion. In blue and combined nevus streaks at the periphery can be seen by the presence of radially oriented bundles of melanocytic cells or melanin-laden macrophages. In contrast with the streaks at the periphery of melanoma or Spitzoid/Reed type melanocytic lesions in blue nevus these structures show a slate-blue pigmentation and are out of focus due to their depth. 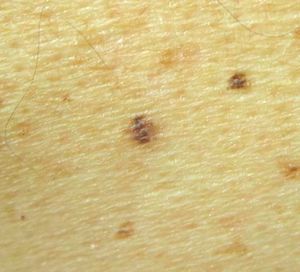 In the nevus of Ota and nevus of Ito a diffuse irregular blue-brownish pigmentation is the main dermoscopic feature.

Dermoscopic Differential diagnosisis the identification of the nature and cause of a certain phenomenon. Diagnosis is used in many different disciplines with variations in the use of logic, analytics, and experience to determine "cause and effect". In systems engineering and computer science, it is typically used to determine the causes of symptoms, mitigations, and solutions of blue nevus 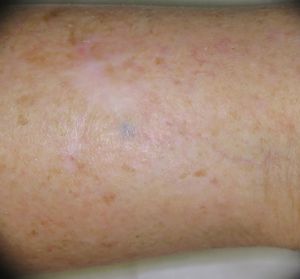 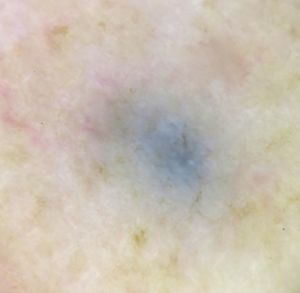 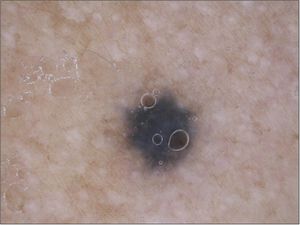 ManagementThis glossary term has not yet been described.

Blue nevi are benign lesions and no treatment or follow-up is needed. The history of recent change or the evidence of increase in size or change in structure demonstrated by digital follow up is the clue for not missing melanoma blue nevus like.

ReferencesThis is material contained in a footnote or bibliography holding further information.