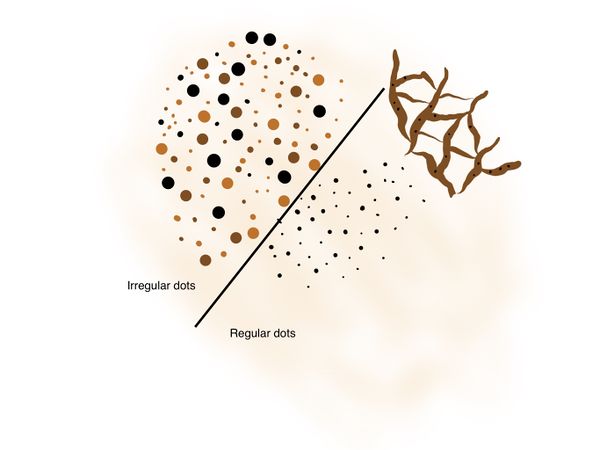 Irregular dotsAny distribution of dots other than dots as described for regular dots. tend to be heterogenous in size, shape and color and are frequently found at the periphery of a given lesion or scattered throughout the lesion.

In melanomas, dots are irregularly distributed and may be found focally at the periphery of lesions. Blue-gray dots can also correspond with small dermal aggregates of pigmented BCCAbbreviation for Basal Cell Carcinoma. Red dots are equivalent to dotted vesselstiny pinpoint vessels and can be seen in diverse cutaneous tumors such as keratinocyte carcinomas, Spitz neviThis glossary term has not yet been described. and melanomas [1].
Retrieved from "https://dermoscopedia.org/w/index.php?title=Irregular_dots&oldid=15797"
Category: