The classic melanomaThis glossary term has not yet been described. specific criteria are predominantly seen in SSMs but much less frequently in NMs.

Especially the features correlating with the radial growth of melanoma and pagetoid spread (pseudopodsBulbous and often kinked projections seen at the lesion edge, either directly associated with a network or solid tumor border., radial streamingRadial linear extensions at the lesion edge) as well as those criteria found in thin melanoma (such as atypical broadened networkThis glossary term has not yet been described. and the early regression feature of multiple blue-gray fine dots or pepperingGray dots) are often lacking in NMs.

However, pigmented NMs more frequently have those dermoscopy features associated with thick melanoma[1] : 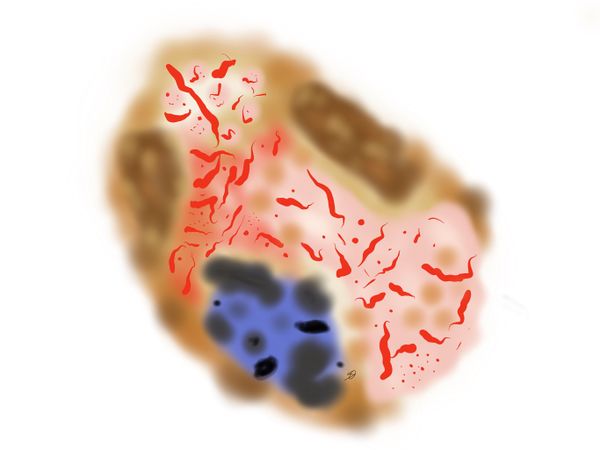 Melanomas tend to have an asymmetric pigmentation pattern under dermoscopy. While most NM are asymmetric, 6% have a symmetric pattern [1] . Nevertheless, the majority of pigmented NMs can be diagnosed using standard dermoscopy criteria.

What is diagnostically problematic is the fact that a significant number (more than a third) of NMs are hypomelanotic or amelanotic. In these cases, atypical vascular patterns may be the only cluesEvidence, in an investigation for the diagnosisis the identification of the nature and cause of a certain phenomenon. Diagnosis is used in many different disciplines with variations in the use of logic, analytics, and experience to determine "cause and effect". In systems engineering and computer science, it is typically used to determine the causes of symptoms, mitigations, and solutions of such lesions [1]. The most significant of these patterns are the combination of linear irregularlinear vessels with multiple bends and dotted vesselstiny pinpoint vessels or linear irregular vesselsThis glossary term has not yet been described. as the predominant vessel type, greater than one shade of pink, milky red-pink areas and or globules, and hairpin vessels. 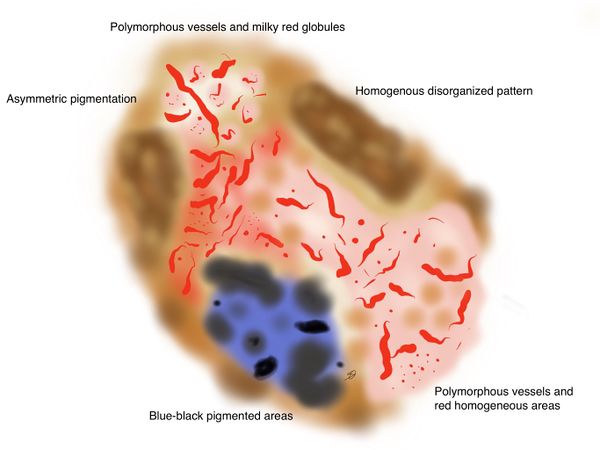