DermoscopyThe examination of [skin lesions] with a 'dermatoscope'. This traditionally consists of a magnifier (typically x10), a non-polarised light source, a transparent plate and a liquid medium between the instrument and the skin, and allows inspection of skin lesions unobstructed by skin surface reflections. Modern dermatoscopes dispense with the use of liquid medium and instead use polarised light to cancel out skin surface reflections.[1]:

The most frequent dermoscopic pattern of pyogenic granuloma consists of reddish homogenous areas separated by white lines resembling rails and surrounded by a white collarette. 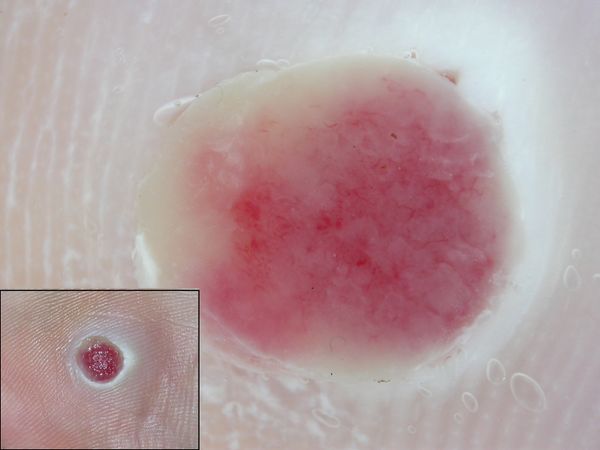 ReferencesThis is material contained in a footnote or bibliography holding further information.:
Retrieved from "https://dermoscopedia.org/w/index.php?title=Pyogenic_granuloma&oldid=14580"
Category: