Nevus and lentigo of the nail matrix

Nevus of the nail matrixThis glossary term has not yet been described. 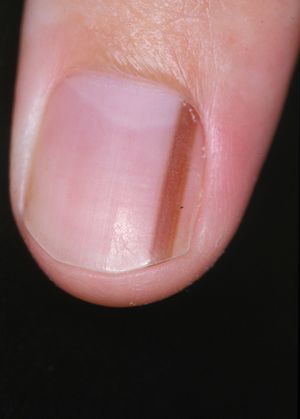 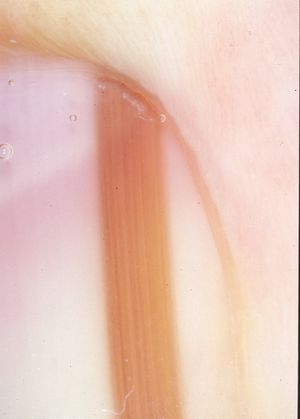 Lentigo and lentiginoses of various types (e.g. Laugier–Hutziker, Peutz–Jeghers or Carney complex) may affect the nail unit. Examination of other involved areas and consideration that the nail pigmentation is polydactylic greatly aid in diagnosisis the identification of the nature and cause of a certain phenomenon. Diagnosis is used in many different disciplines with variations in the use of logic, analytics, and experience to determine "cause and effect". In systems engineering and computer science, it is typically used to determine the causes of symptoms, mitigations, and solutions. DermoscopyThe examination of [skin lesions] with a 'dermatoscope'. This traditionally consists of a magnifier (typically x10), a non-polarised light source, a transparent plate and a liquid medium between the instrument and the skin, and allows inspection of skin lesions unobstructed by skin surface reflections. Modern dermatoscopes dispense with the use of liquid medium and instead use polarised light to cancel out skin surface reflections. shows a gray band-like pigmentation. Follow-up of these patients might be difficult since additional longitudinal pigmented bands may occur over time.

Blue nevus of the nail unit is also a very rare entity[4]. Dermoscopically, it corresponds to a blue proximal spot which is stable over time. In our view, the diseaseThis glossary term has not yet been described. is rare enough to justify surgical exploration of the nail matrix and excision of the lesion. 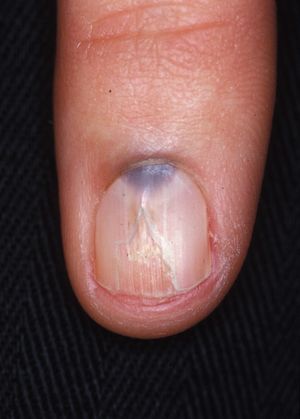 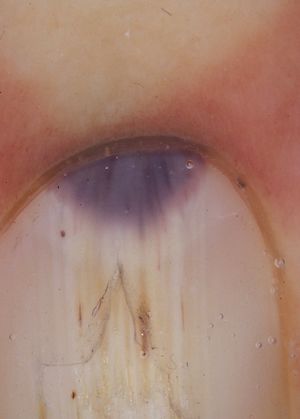 ReferencesThis is material contained in a footnote or bibliography holding further information.
Retrieved from "https://dermoscopedia.org/w/index.php?title=Nevus&oldid=16861"
Category: