Dots are small, round and well circumscribed structuresThis glossary term has not yet been described. smaller than globules (less than 0,1 mm, similar to the diameter of a terminal hair follicle) (Kittler et al., 2016a). Their color vary from brown, black, gray, blue to red. Histologically, they correspond to pigmentation along different levels of the epidermis or dermis. Black dots reveal pigmentation of the upper epidermis or the stratum corneum. Brown dots reveal small melanocyticThis glossary term has not yet been described. nests in the epidermis or in the DEJ. Blue-gray dots correspond to the presence of pigment in the upper dermis or in dermal melanophages (the equivalent to pepperingGray dots). In melanomas, dots are irregularly distributed and may be found focally at the periphery of lesions. Blue-gray dots can also correspond with small dermal aggregates of pigmented BCCAbbreviation for Basal Cell Carcinoma. Red dots are equivalent to dotted vesselstiny pinpoint vessels and can be seen in diverse cutaneous tumors such as keratinocyte carcinomas, Spitz neviThis glossary term has not yet been described. and melanomas (Massi et al., 2001b; Yadav et al., 1993). Black or brown dots may appear after acute ultraviolet exposure; however, these dots tend to disappear over time. It is interesting to note that many non–ultraviolet-induced dots that are successfully tape stripped off the skin reappear with time. 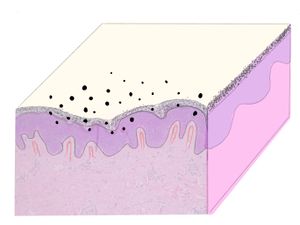 ReferencesThis is material contained in a footnote or bibliography holding further information.
Retrieved from "https://dermoscopedia.org/w/index.php?title=Dots&oldid=15791"
Category: