It has the following subchapters:


Both the negative and the positive dermoscopic features associated with pigmented BCCs have been well characterized [5][6][3]. The negative feature of pigmented BCCs is that they cannot display any structuresThis glossary term has not yet been described. seen in melanocyticThis glossary term has not yet been described. lesions including pigment networkGrid-like pattern consisting of interconnecting pigmented lines surrounding hypopigmented holes., streakslines radial (always at periphery) streaks Reed nevus melanoma recurrent nevus, negative networkSerpiginous interconnecting broadened hypopigmented lines that surround elongated and curvilinear globules., aggregated or peripheral brown globulesThis glossary term has not yet been described.. The positive features of pigmented BCC include the presence of any one of the following structures:

The nests are defined as confluent or nearly confluent, well-circumscribed, pigmented ovoid areas. The difference between an ovoid nest and a blue-gray globuleThis glossary term has not yet been described. is the relative size of the structure. An ovoid nest encompasses at least 10% of the surface area of the lesion and blue-gray globules are smaller. The presence of an ovoid nest corresponds to basal cell tumor islands in the dermis and these lesions will prove to be nodular BCC on histopathologyThis glossary term has not yet been described.. 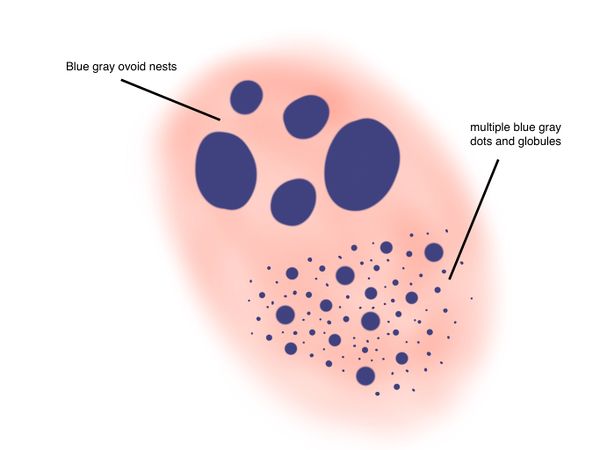 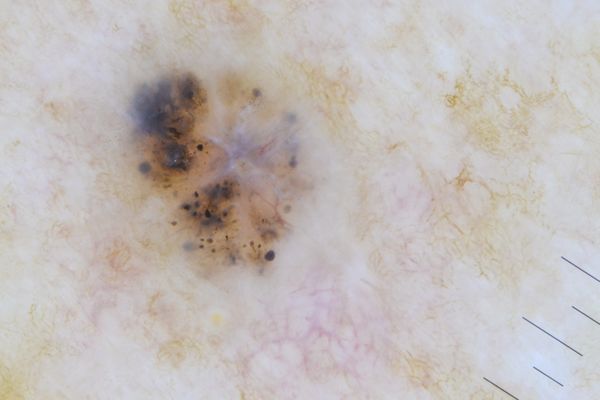 Blue-gray dotsDots are small, round structures of less than 0.1 mm in diameter that have a red color when corresponding to blood vessels; however, when due to melanin, their color ranges from black, brown, to blue-gray depending on the depth and concentration of the melanin in the skin (Tyndall effect). are pinpoint blue-gray structures that are often distributed in a buckshot scatter like pattern (Figure ). This structure can be seen in early nodular BCC or in superficial BCC. Blue-gray globules are well-defined round or oval structures, larger than dots, but smaller than large ovoid nestsThis glossary term has not yet been described.. They are not aggregated as would be seen in melanocytic lesions. They usually have a blue-gray colorColor (American English) or colour (Commonwealth English) is the characteristic of human visual perception described through color categories, with names such as red, yellow, purple, or blue.; however, depending on the location within the dermis (Tyndall effectCaused by light scattering by particles in a medium. The longer-wavelength light is more transmitted while the shorter-wavelength light is more reflected via scattering.) and degree of melanin within the pigmented basaloid tumor islands, the globules can appear brown or pink in color. This structure corresponds to small basal cell tumor islands in the dermis and thus they will prove to be nodular BCC on histopathology. 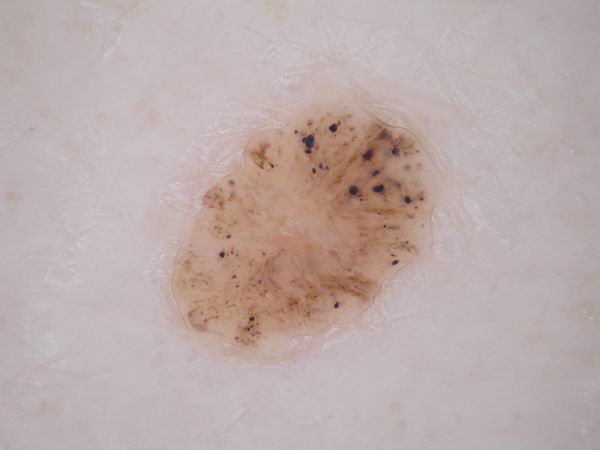 These areas are defined as discrete, linear to bulbous extensions connected at an off-center base area, forming a leaf-like pattern. They are usually brown or gray-blue in color (Figure ). This structure is quite specific for superficial BCC. The bulbous to linear extensions forming the leaf can sometimes be mistaken for streaks seen in melanoma. However, the streaks in melanoma tend to be discrete, well-delineated, narrow, relatively in-focus linear extensions that are located at the perimeter of the lesion and are directly connected to the main pigmented tumor mass. Streakslines radial (always at periphery) streaks Reed nevus melanoma recurrent nevus in melanoma always radiate in a direction pointing away from the main pigmented tumor mass and they radiate toward normal skinThis glossary term has not yet been described.. In addition, streaks in a melanoma appear to converge towards the geometric center of the lesion, which is often hyperpigmented and has a blue-white veil. In contrast, extensions seen in leaf-like structures tend to be broader and often appear “fuzzy” or out of focus. They do not have to be located at the lesion’s perimeter and they do not always have to radiate away from the main tumor mass toward normal skin. In addition, the extensions seen in BCC tend to converge at an off center pigmented base. This base together with its “extensions” is present focally and most often located towards the periphery of the tumor and it is this configuration that creates the leaf-like structure. In addition, the geometric center of BCCs manifesting “fuzzy streaks” (leaf-like areasBrown to gray/blue discrete linear or bulbous structures coalescing at a common off center base creating structures that resemble a leaf-like pattern.) is often hypopigmented and relatively structurelessThis glossary term has not yet been described.. 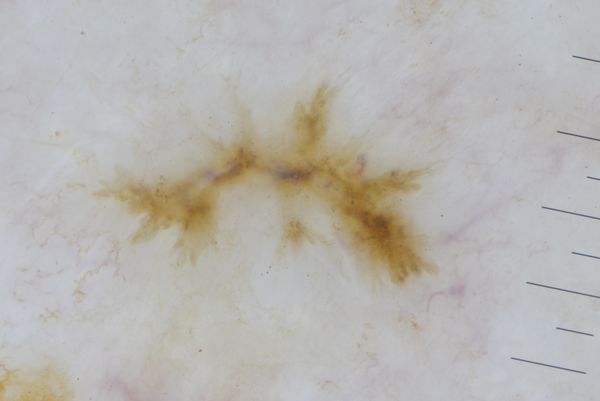 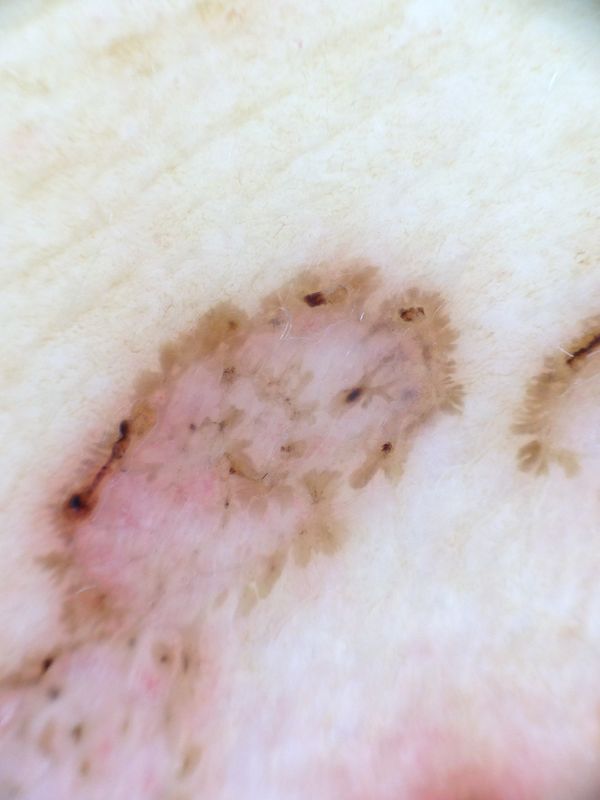 These consist of multiple branching blood vesselsare the part of the circulatory system, and microcirculation, that transports blood throughout the human bodyThis glossary term has not yet been described. in a tree-like pattern. The base of the vessel is larger and the branches of the vessel become smaller in diameter. The vesselsThis glossary term has not yet been described. tend to be bright red and sharply in focus. Arborizing vesselsanalytic term is branched vessels; Bright red sharply in focus large or thick diameter vessels dividing into smaller vessels; BCC surround dermal basal cell tumor islands and thus are associated with nodular BCC. 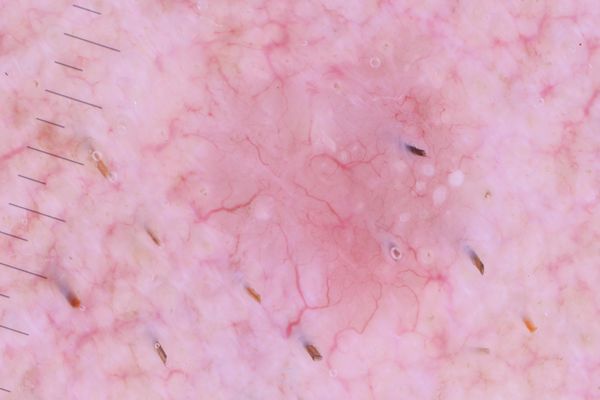 UlcerationThis glossary term has not yet been described.:

These structures consist of shallow erosions that may be covered with congealed blood. They can also appear to have an orange hue if covered with a serous crust. Ulcers covering at least 10% of the surface area of the BCC correspond with nodular BCC. The presence of multiple smaller ulcers, termed erosions, is a feature seen in superficial BCC. 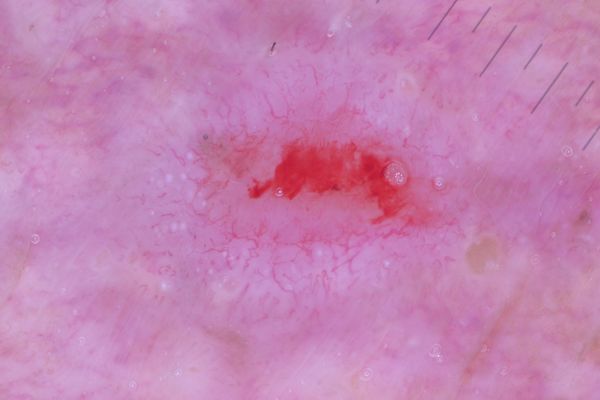 This structure can only be seen with polarized dermoscopy and consists of white patches or blotches and linear white areas called strands [7]. 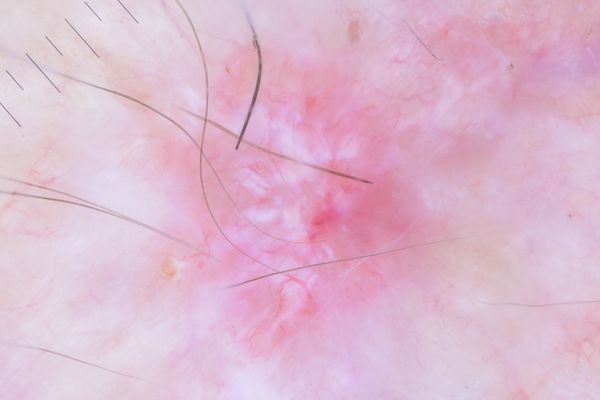 ReferencesThis is material contained in a footnote or bibliography holding further information.:
Retrieved from "https://dermoscopedia.org/w/index.php?title=Basal_cell_carcinoma&oldid=16531"
Category: